Some Fish are Meant to be Caught!

Last Thursday evening I accompanied Dave and Amelia Jensen as we prospected a central Alberta stream.  We were scouting potential location for an upcoming episode of The New Fly Fisher which I will be filming with Dave and Amelia along with Tom Rosenbauer from Orvis during the week of July 19th.  Our goal for the evening was to drift and search for snouts sipping quietly along the river's edge.  As there was goldeye in the river as well I had to learn to distinguish the difference between the somewhat aggressive concentrated rises of gold eye verses the individual slurp of a large brown. 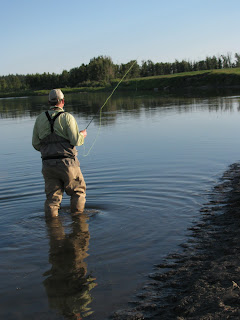 (Photo Courtesy of Amelia Jensen)
The brown trout population is sparse so a keen eye was required by all.  It is amazing how subtle rises can pass unnoticed if you are not prepared to look and study a section of water.  Just as darkness approached we found a small number of browns rising along the edge of a high grass bank.  As Dave had yet to cast to a trout it was his turn.  Amelia and I had targeted a couple of risers with no success earlier in the evening.  Dave made one cast and as his fly drifted into the trout's window it disappeared in a confident deliberate rise.  After a spirited battle the large, 25-inch plus brown lay at our feet.  She was, beautiful fat and healthy. 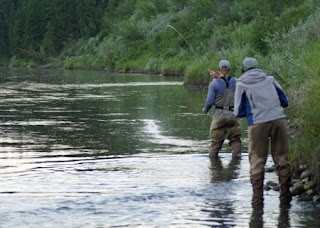 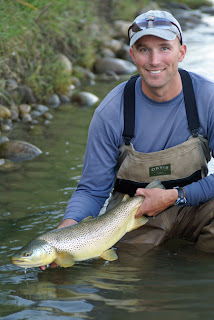 Another trout rose a few yards upstream from where Dave had taken his gorgeous brown. Now it was my turn.  Since my rod was downstream in the boat Dave offered me his rod.  After all, his large brown drake imitation had already proven its worth.  Up steps challenge number one.  Dave prefers double taper lines, I have been using weight forward lines for years. I didn't realize this right away and it took me a number of casts for me to get used to casting a double taper once again.  Finally I was able to get the distance and accuracy needed to cover the fish.  My fly drifted down to where we had seen the fish move and it was taken in a gentle deliberate slurp.  I let the fish take the fly and game on.  Up steps challenge number two.  As the fish bolted I realized that Dave's reel was set up for right hand retrieve.  As lefty hybrid who casts right handed, the product of being brought up in a right-handed world, my reel is set up to retrieve left handed.  I was not able to gather line and control the fish as I would have liked.  Up steps challenge number three.  Another fish was rising upstream of this fish so I did not want my fish to spook that fish as Amelia was next up to bat.  Due to my trying not to have the fish bolt upstream and my battle trying to reel right-handed I was not forceful enough with the fish and it forged its way out into the main current and proceeded to wrap itself around a rock.  The fish was still attached as I could feel it throbbing through the line.  Now what?  Well thankfully, at over 6-feet tall, Dave offered and was able to wade out and above the fish and free the line.  Game on again.  Up steps challenge number four, my final challenge.  Now the fish took off down stream and decided that under our anchored boat was good place to go.  The leader rubbed against the anchor rope which we were able to free and not soon after the fish was in the net resting and recovering before being released. 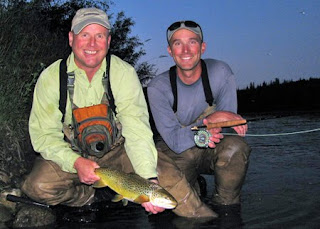 (Photo Courtesy of Amelia Jensen)
I couldn't believe I had been fortunate enough to land this fish.  By all rights I should have lost it on at least three or four occasions.  I guess some fish are just meant to be caught.   The moral of this story is to use your own equipment or at least get comfortable with and know what you are borrowing before going live!

Amelia stepped up to bat after my adventure but darkness had taken over and the swarm of mosquitoes was intensifying with every minute despite our multiple applications of bug juice.  I felt bad as my bumbling had consumed valuable time and daylight.  Next time Amelia goes first!
Posted by Phil Rowley at 1:05 PM