This past week found me in central Alberta filming an upcoming episode of the New Fly Fisher.  Each year I host or co-host a number of the 26 episodes we film annually. Tom Rosenbauer, Marketing Director for Orvis Rod and Tackle joined me as we hosted an episode entitled "Hunting Trout".  We were guided by Dave and Amelia Jensen from Fly Fish Alberta.  Dave and Amelia know this region like few others.  It was one of my most memorable shoots and fishing trips all wrapped up into one.  We based ourselves out of the Black Knight Inn in Red Deer, an ideal location for targeting central Alberta's blue ribbon trout streams.

Since moving to Alberta one of my goals involved spending more time exploring its world class rivers and streams, especially those containing brown trout.  An item on my bucket list if you will.  In addition, I wanted to experience new hatch opportunities such as the legendary Hexagenia emergence.  I had experienced a Hexagenia (Hex) hatch once previously but not in the biblical proportions we had on this trip.  For those not familiar with Hex, they are one mutant mayfly.

We sampled nymphs that were easily two inches long.  These burrowing nymphs are accomplished swimmers.  They propel themselves through the water using rapid undulations in combination with their interlocking external gills located along the sides of their bodies.  A serious mouthful for any trout.

The adults are slightly smaller, their bodies are just over an inch long.  Due to their large size we managed numerous takes of large brown trout lips poking through the surface to pluck the duns and spinners into their waiting jaws.  We managed to film some spectacular takes to both naturals and our dun patterns on camera.  Dave provided us with a unique foam based pattern we christened the 'Get R Dun'.  Casting a buoyant #6 dun imitation is my idea of dry fly fishing!  The 'eats' to both the naturals and our impostors were unbelievable.

During the course of our stay, cloudy overcast days increased the hatch intensity and the browns were quick to slide out from the undercut banks to dine at their leisure.  When darkness fell things went from good to stupid on some nights.

Placing the landing net in the water at the surface for a few seconds gathered staggering numbers of duns.  The browns went nuts and we followed suit, leap frogging each other along the banks targeting the sounds of large slurps that filled out ears.

My only regret was that our time passed too fast and that the hatch is short in duration only lasting a couple of weeks.  Don't worry my calendar has already been circled for 2011! 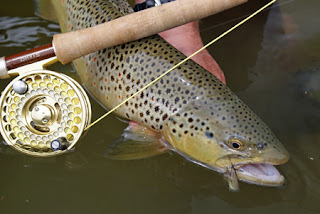