Earlier this week I returned from the Fly Fishing Show in Somerset New Jersey, home of the world’s largest dedicated fly fishing show.  This year marked the show’s 20th anniversary.


In the fly fishing world the New Jersey Fly Fishing Show is the place to be when it comes to fly shows.  If you had to pick one fly show to visit this one would arguably be it.  Each day thousands of fly fishing enthusiasts packed the Garden State Convention centre.  At times it was so crowded it was hard to navigate down the aisles.  The seminar theatres, casting ponds and booths were home to the current who’s who of fly fishing.  Lefty Kreh, Gary Borger, Bob Clouser, Bob Popovics, Simon Gawesworth, Barry and Cathy Beck were just a few of the celebrities in attendance.


This year, like last, I was at the show in support of The New Fly Fisher television show I have been a co-host of now for a number of years.  The New Fly Fisher had two booths in support of the shows we have shot in the provinces of Ontario and Newfoundland Labrador.  I was stationed in the Newfoundland Labrador booth.  Home of the impressive fibreglass mount of two huge Labrador brook trout that weighed nine and ten pounds respectively.  These mounts were popular talking and stopping points for many.  Both of these fish are still prowling the waters of Labrador so you can still book a trip and cross paths with them.  Labrador is one of the last bastions of trophy brook trout.  In 2011, one of the guides we were filming with managed to catch and release an 11 pound monster!  Check out the Osprey Lodge episode for the footage.

It was nice to see old friends and make new ones as countless people dropped by our booths both to inquire about trips and to personally thank us for the work we do on the show.  People commented constantly on how they enjoyed the educational format The New Fly Fisher has become recognized for.  It was for this reason that I first became involved with the show.  We even received a few tips from viewers that would add even more educational elements which we will blend into future episodes.  I am looking forward to filming again in 2012. 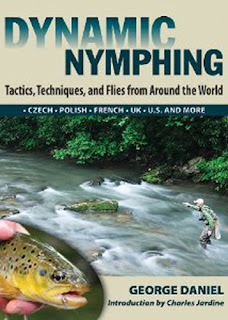 Shows like the New Jersey Fly Fishing Show are also great venues to see what’s new.  This year two books caught my eye.  The first, Dynamic Nymphing by George Daniels is an excellent full color book detailing the variety of nymphing methods and the flies now in use today.  These methods were first introduced with Polish nymphing that took the world by storm during the 1989 World Fly Fishing Championships.  Polish angler Vladi Tzebunia obliterated the competition, taking the individual gold medal by storm.  Vladi’s performance was nothing short of spectacular as he garnered more points than the next three national teams combined.  Since Vladi’s initial success, a variety of countries and fly fishers have put their own stamp on this nymphing technique.  It is a method I have become a student of since first seeing it first hand by George and my good friend Pete Erickson over six years ago. George’s title is apropos, as methods and techniques are always changing.  Dynamic Nymphing captures this current state of flux. I highly recommend picking up a copy.


Dave Klausmeyer is the editor of American Angler and Fly Tyer magazines.  I hold a special place for both of these publications as they were the first to take a chance on my writing many years ago.  Since that time I have had the pleasure of working with a number of editors for both publications.  Over the years Dave and I have bumped into each other on a number of occasions and have developed a good friendship.  Dave’s most recent book The Master’s Fly Box features 15 of North America’s premier fly tyers.  For some reason Dave felt I should be included in this mix featuring a chapter on my patterns, the Stillwater Solutions product line and my current work on the New Fly Fisher television show.  My good friend Brian Chan also has a chapter dedicated to some of his favorite patterns and the legacy of work he created in fisheries management and with the Freshwater Fisheries Society of B.C. in particular. 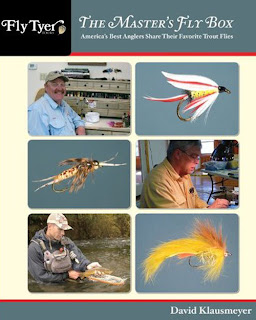 If you are looking to add some new books to your library consider picking up a copy of both George’s and Dave’s new books.  Both books are packed with information and excellent color photos.

I am now home for a few weeks trying to catch up on a number of writing assignments.  My next show finds me in California. I will be speaking at the Pleasanton Fly Fishing Show that runs from February 24-26, 2012.  In Pleasanton I will be providing talks on a number of stillwater related subjects and a hands on fly tying workshop.  The tying tying workshop includes all materials.  Space is limited so if you would like to spend a couple of hours learning some of my favorite patterns while tolerating my jokes please join me.  A complete breakdown of all the Pleasanton seminars and workshops, including mine, can be found on the Fly Fishing Show’s website.  Hopefully you can find the time to drop by.

Posted by Phil Rowley at 7:16 PM No comments: