Lago Strobel-Getting There, and Back, is Half the Fun!

Earlier this month I returned from Argentina, Estancia Laguna Verde where I spent two weeks chasing rainbows on Lago Strobel, AKA Jurassic Lake to be exact.  At first I thought about condensing my two week experience into one entry but after some thought about my trip and the lessons learned a multi entry approach in fitting with the educational focus of my blog made sense.  This first entry focuses on getting to and from Estancia Laguna Verde.  Getting there and back proved half the fun!  Well almost.

The initial part of my Lago Strobel adventure began to investigate and explore my flight options.  At first I thought booking flights might prove complicated.  In reality booking my flights proved anything but.  No more difficult than booking a domestic flight or a trip to the states.  I booked online, a round trip ticket from Edmonton to Buenos Aires through United Airlines and a round trip from Buenos Aires to El Calafate through Aerolineas Argentinas.  As soon as my flights were booked my upcoming trip was real.

I am not going to lie, the trip is long, especially the overnight flight from Houston to Buenos Aires and back.  My trip south began early in the morning checking in for the first leg of my flight to Houston.  The flight to Houston took roughly five hours.  My friend Rick, who I was travelling with, and I had a long layover of some seven hours before continuing on in the evening with our flight to Buenos Aires.  Our layover gave me ample time to catch up and even get ahead on a few emails and other things as I knew in the coming days my attention might be somewhat diverted.  Houston was the meeting place for most of my group as we met up with my trip partner Andy and his good friend Butch later on as they trickled in from their initial flights.

At roughly 8pm we boarded our flight to Buenos Aires.  The Boeing 787 ‘Dreamliner’ we flew down on was an impressive aircraft.  Some nine seats wide!  I settled into my window seat and began to search through the movies and other entertainment on offer.  After our inflight meal I began watching a couple of movies to see if that would knock down my excitement and help me get a few hours of sleep.  I don’t sit still for long and I am not one of those people who slip into a comfortable sleep in their airline seat.  Our 9.5 hour flight took us over the Caribbean Sea over central America and then paralleled the western coast of South America past Ecuador, Peru and halfway down Chili.  Our return trip home followed the same route. As dawn approached we turned east for our final portion of our flight into Buenos Aires.  The morning sun splashed across the Andes was an impressive sight from 39,000 feet.

Prior to our departure from Houston the captain advised us that President Obama was in Buenos Aires and we may have to orbit the city as Air Force One was scheduled to leave.  There were no delays in landing.  Argentine customs was another story.  President Obama’s presence resulted in a number of international flights arriving at the same time.  There had to be over 1000 people in line waiting to proceed through Argentine customs.  All we could do is shuffle along.  It took us minutes to proceed through customs the lineup shuffle however took close to two hours!

After picking up our luggage, it all arrived safe and sound, we proceeded through the last steps of arrival, scanning your luggage by Argentine immigration.  Even after a few weeks to review and digest my trip I am not exactly sure what the point of scanning the luggage after getting off the plan was all about? Now the fun began, Buenos Aires traffic.

It took me just minutes to realize I would never rent a vehicle in Buenos Aires.  Road signs, traffic lights and painted lines are just a suggestion.  With over 13 million people living in the greater Buenos Aires area vehicles abound.  The ride through Buenos Aires traffic is worth the price of admission.  This was magnified with President Obama’s presence, major highways were closed. soldiers, police and other officials were everywhere channelling and directing traffic.  On both legs of our journey our taxi rides through Buenos Aires was like being part of a virtual Mario Kart game.  Despite the chaos after a few trips in Buenos Aires traffic there is a system of sorts that seasoned drivers follow and understand.  A system best appreciated from the rear seat of a taxi!

We spent two nights in the Palermo district of Buenos Aires, one on the way down and one on the way back.   I would recommend anyone do this for two primary reasons.  First of all, on the way down you have a chance to rest and settle in after or before your long overnight flight.  Second, many of the domestic flights to El Calafate do not leave from or arrive at the international airport, Ezeiza but rather Jorge Newbery Airfield located some 42 KM (26 miles) to the north.  At best, with minimal traffic, an oxymoron in Buenos Aires, it is a 45 minute drive.  If you have tight connections there is a good chance you won’t make it.  There is also a chance your original domestic booking may change. If a flight isn't heavily booked there is a good chance your original domestic flight either to or from El Calafate will be cancelled and your booking transferred to either a later or earlier flight. Take my advice, spend a night in Buenos Aires on both your trip to and from El Calafate, do some sightseeing and experience some of the wonderful cuisine on offer. 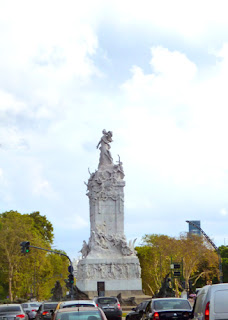 Located roughly 3.5 hours south of Buenos Aires lies El Calafate, a beautiful town.  The main street reminded me of Banff or Jasper.  The region is famous for its ecotourism and if you have any extra time in your schedule I would recommend spending it experiencing the El Calafate region.  The Perito Moreno glacier is spectacular.  I regret only spending a half day in El Calafate on the way down during my trip.

Estancia Laguna Verde is located 329 Km (204 miles) north/north east of El Calafate.  The scenic trip takes roughly 5 hours reminding me of drives I have taken in eastern Oregon or through British Columbia’s Fraser Canyon.  For our drive in from El Calafate we were picked up just before 8am in a mini bus.  We proceeded up highway 40 which is paved most of the way.  About 2.5 hours into our travel, soon after the road transformed into a good gravel road, we were met by a convoy of lodge trucks filled with guests from the previous week.  The guides and mini bus driver quickly transferred gear between vehicles.  While waiting for the gear transfer to complete I experienced, as I often do when travelling, a small world event.  In the group that was coming out of the lodge I bumped into Jim Teeny, small world.  Jim and I know each other through our tradeshow appearances as our speaking schedules often overlap.  Jim provided a brief overview of his week and was excited to be continuing his trip with a week of chasing sea run brown trout in Tierra Del Fuego.

Two and a half hours later we arrived at Estancia Laguna Verde.  Our gear was loaded into our rooms, our waders and wading boots were disinfected while we ate a filling lunch and enjoyed the first of many glasses of Argentinian Malbec.   After lunch it was time to gear up and go fishing.