The Perils of Social Media

Social media has become part of our everyday lives.  Facebook, Twitter and blogs are just some of the avenues we have at our disposal.  The world now communicates and markets itself in a totally new way.  I have become a fan of Facebook and the benefits it offers and of course I enjoy communicating through my blog.  But for the pros of social media there are also a few cons.

One of my good friends chose not to have a personal Facebook page.  Someone however, decided he should.  As part of bet with friends this person set up an erroneous page.  The goal of the bet was to see who could have the most friends by the end of a set period.  I was first alerted to this when my friend asked me to become his friend via Facebook page.  I did not accept, feeling something wasn’t right as through prior discussions my friend had stated that he wasn’t interested in having a Facebook presence.  After a quick phone call it was clear my friend was being misrepresented.  His page was gathering lots of friends who were asking questions of him.  In some instances these questions were answered!  I, along with a few other mutual friends reported the site to Facebook via the report/block feature at the bottom of the page.  Another friend went on the page and posted that the page was false.  His posts were removed by the originator of the page!  Despite these efforts the page remained and his list of friends continued to swell.

Finally, the originator of the page contacted my friend via email advising him of what he had done and why.  Hoping that my friend would approve!  This person even suggested to my friend that he continue with the page and what he had set up.  My friends response was swift and to the point.  His privacy, integrity and reputation were placed at risk and my friend asked him to terminate the Facebook page immediately.  My friend also asked for him to contact of the ‘friends’ to let them know that the page was false prior to shutting it down.  Fortunately my friend’s request was granted and the page has since been shut down. The issue resolved to my friend's satisfaction.

So despite the benefits of social media there are still a few out there who have their own unique version of how things should work.  Be wary. If you see or experience something like this yourself take the steps to make sure it stops and if possible so it can’t happen again.  Make sure your privacy settings on Facebook for example are set for what you want the world to see or not see.  Learn all you can it pays to be educated.
Posted by Phil Rowley at 2:26 PM No comments:

This past weekend saw the last of my planned seminars and appearances speaking at the Haig-Brown Fly Fishers Symposium.  Over 200 people attended the two day event having the chance to see a number of quality speakers including Brian Chan, Skip Morris, Peter Morrison, Dana Sturm, Don Freschi, Tom Johansson, Todd Oishi and me.  Talks began at 9am on both Saturday and Sunday.  I provided sessions on How to Find Trout in Stillwaters and a Hatch Guide for Lakes.

The Haig-Brown club was top drawer in their organization and providing a great environment for the speakers.  Saturday night for example they organized a pizza and beer event for speakers and attendees to mingle.  This symposium runs every two years so if you are in the neighbourhood in 2012 make a point of sitting in.  There should be lots to learn!

In addition to the symposium I had the chance to spend a day on the water chasing sea run cutthroat trout.  Barry Stokes from Islander Reels and I explored a couple of beaches in the Victoria area.  The weather was pleasant and we bumped into a few other friends who were taking advantage of the sunny conditions.  Cutthroat were present, which is always an issue as these fish are notoriously nomadic.  Chasing sea run cutthroat is more of an experience trip rather than one of numbers.

We used either Aqualux lines or in my case Rio’s Outbound hover and small minnow patterns.  Barry managed to land a beautiful 18-inch sea run on one of his neat streamers.  Small forage fish such sculpins are popular forage items for these beautifully spotted fish.

Casting flies knee deep on a gently sloping beach is both relaxing and therapeutic.  During our day we saw a variety of wildlife including sea birds, harbour seals and on one beach a family of seven otters came down to inspect what we were up to.  Unfortunately they did not get close enough to snap a picture.  Beautiful creatures they are we all wondered what toll they took on the local cutthroat population.

Sea run cutthroat are fragile and as they often spawn in tiny creeks and trickles they are susceptible to urbanization and development.  Creeks most wouldn’t know existed or be aware of their significant importance as spawning and rearing habitat.  As new developments are built these small creeks are often manipulated and in some instances in the past filled in.
Posted by Phil Rowley at 7:07 PM 1 comment:

So far this November I have been blessed by clear skies and relatively warm temperatures.  You know the kind that makes you wish you were on the water.  I am still busy with seminars but I did manage to sneak out on one of my local lakes for some late season pike on the fly.  Joining me was my friend Bill who had purchased a trip with me through a Trout Unlimited Canada donated trip I had provided in 2009.  Each year I donate a number of guided trips to Trout Unlimited Canada to support their efforts to conserve, protect and restore Canada’s coldwater resources.

We had tried getting together only a few weeks before but cold windy conditions made use think otherwise.  On this day Bill and I were greeted by light winds, highs of 10C and beautiful sunny skies.  In the past my local lake had a warm water discharge that concentrated baitfish attracting lots of large nasty pike.  The plant that generated the discharge closed its doors and my pike magnet was gone.  The channel the outflow created has grown over and after an hour or so of prospecting we had nothing to show for our efforts.  I was a bit disappointed that things had changed but in many ways it was good that I would have to explore and learn new areas of the lake.

Thankfully my efforts paid off and Bill, who had never caught a pike on the fly, was rewarded with a decent fish, the best we would get for the day.  Bill got his fish on a variation of a Fire Tiger Half N Half I tied using Super Hair.  It got pretty beat up during the fight but thankfully synthetics comb back into shape pretty quickly.

We were using 9 and 10 weight rods, floating lines and Rio’s Toothy Critter leaders to start.  Once we had consumed the wire tippet after a few pattern changes I replaced it with some of Rio’s 20lb Knottable Bite Tippet.  Rio’s Knottable Bite Tippet is outstanding, durable and a dream to tie knots with.   Rio's Bite Tippet is so flexible and user friendly that I use my favorite knots that I use for traditional nylon and fluorocarbon leaders. 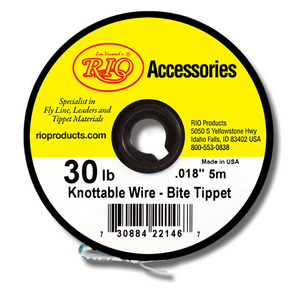 The Knottable Bite Tippet also has a secondary function that some might not be aware.  It is excellent for large articulated flies such as those developed and popularized by Kelly Galloup.  It also works well for Intruder style patterns too.

It was an articulated pattern that I was experimenting with that lead to my getting my right thumb into a place it shouldn’t go.  One of my favorite patterns for pike is an all white Popsicle Leech.  I wanted to make a larger version of this proven pattern and after meeting and talking with Kelly Galloup I knew that articulation was the only way to go.  I decided to leave both hooks on the fly which in hindsight wasn’t quite the way to go as removing the trailing hook proved challenging as the pike refused to let go.  I am not a big fan of jaw spreaders as I worry about their effect on the pike and most times I end up loosing them when the pike shakes its head.  They spring free and pinball of the boat and typically end up in the water.  Often I am able to get my fingers under the chin flap of the pike causing it open just enough to reach in with a large pair of forceps and remove the fly.  So I began to work on getting my fly free.  I started by holding the pike in the water using my right hand.  Although I am left handed I have evolved into a hybrid of sorts doing many things right handed such as using forceps.  Somewhere in transferring pike between hands and fumbling with the forceps and fly my right thumb ended up in the center of the pikes mouth, as though it was sucking it.  It wasn’t too painful but those things can exert a fair bit of pressure.  The one thing not to do was pull my thumb out as this would have made a right mess. Part of my guiding includes education but this might have been taking things a bit too far.  Now the jaw spreaders came out and with a few seconds I was able to extricate my thumb.  I had a number of ‘pinholes’ on either side of the thumb and I was squirting blood for a few minutes which delayed my preparing lunch. Bill thought it was pretty funny, as did eye.  Thankfully it wasn’t a larger fish or my new nickname might have become ‘Stumpy’!

It looks like now my season has drawn to a close, as there are lots of snow icons appearing on the weather forecast.  I am looking forward to the down time so I can turn my guns on planning and preparing for the 2011 show and fishing season.  I am sure if the weather warms up a degree or two so it is tolerable I might sneak out to find some open water somewhere.
Posted by Phil Rowley at 3:57 PM No comments: