Well the 2011 show season is officially underway, well for me at least.  This past weekend found me at the Marlborough Fly Fishing Show.  I was there manning The New Fly Fisher booth in support of the Newfoundland & Labrador Outfitters Association (NLOA) as part of the episodes we filmed there in the summer of 2010.

Our adventure began on Wednesday January 12 as James Sidney, one of our cameramen, and I travelled from Ottawa to Marlborough.  The weather was less than friendly and we were driving straight into the Boston area for what would appear to be just in time for a major snow storm.  We didn’t have to travel far to find snow as it began in earnest just down highway 416 from Ottawa.  By the time we crossed the border and travelled down the secondary highways along the west slope of the Adirondacks winter was in full force!  James and I began to wonder if we might have to pull over and spend the night to ride out the storm.  Looking back the snow coming down on the rural farms was beautiful and scenic, almost postcard like.  I should have taken some pictures but we didn’t want to stop and both hands were on the wheel to allow for any ‘drive by’ images.

As we passed through Utica, New York the clouds lifted and things looked brighter.  The roads were clear and we began to make up lost time.  We ran into a few other snow squalls that made for an interesting drive.  Snowflakes’ coming at you in full force at night reminds me of the jump to hyper-space in Star Wars!
Snow ploughs were out in full force and by the time we arrived in Marlborough at around 8pm Streets were clear and with the exception of the snow banks along the road you would never had known there had been a major snow fall.  Luck was on our side as we were travelling just behind the leading edge of the front.  The Boston area received over 20 inches of snow and we were fortunate to miss it.  The rest of the weekend featured beautiful blue banner skies and crisp temperatures.

During the show I presented a couple of destination seminars on the Atlantic salmon opportunities in Newfoundland and Labrador along with a presentation on the trophy brook trout Labrador is famous for.  Saturday’s programs were particularly well attended.  Feedback from show attendees was unbelievably positive.  It seems The New Fly Fisher is well known through our WFN and NESN broadcasts.
I managed to catch up with a few friends at the show such as Jeff Currier and make a few new ones in the process.

James is a great caster and our location adjacent to the casting pond was perfect for him.  During his breaks he managed to get up there on one occasion showing everyone his soon to be famous Sidney Shoot!

This weekend coming up finds me at the Somerset show, the world’s largest fly fishing show.  It is a show I have always wanted to visit.  We will be there once again in support of NLOA and the shows we filmed.  If you are in the neighbourhood please drop by.
Posted by Phil Rowley at 5:27 PM 2 comments:

As the holiday season winds down and 2011 begins it is time to pause and reflect on 2010 and look forward to what 2011 offers.

2010 was one of my busiest years.  A situation I enjoyed and one I want to build on for 2011.  My travels took me all over North America, from coast to coast.  Over the course of the year my role as one of the co-hosts of the New Fly Fisher T.V. show took me to Nanaimo B.C. to film with long time friend Brian Chan, Red Deer and Edmonton Alberta, Labrador, Newfoundland and Montana.  I managed my first Atlantic salmon on the fly.  Topping it off with a 39” 15 pound nickel bright salmon on a 7 weight, definitively a fish I was not expecting!   While filming in Red Deer we landed right in the middle of the Hexagenia or ‘Hex’ emergence.  Large browns sipping huge duns and spinners were a sight to behold. As the light faded to a level too low to film we, including James our cameraman, transformed into excited kids as though it was Christmas morning as we cast to huge browns slurping and gulping well into the evening.

My trip to Montana was one I had wanted to make my entire life.  Chasing gulpers on Hebgen Lake was a dream come true.  A definite ‘bucket list’ event!  I can’t wait to return.  Not only to fish the region’s lakes but to continue exploring some of its blue ribbon rivers and streams too!

In addition to my New Fly Fisher filming I also appeared as a guest on the fledgling BC Outdoors Sports Fishing show, currently airing on W.F.N.  Together with editor and host Mike Mitchell I filmed a total of three episodes and look forward to filming more in 2011.

2010 also saw an increase in the number of seminars and club presentations.  Amongst the highlights included a fall stillwater school in California , a stillwater school on scenic Fortress Lake and two hosted trips to the Parklands region of south-western Manitoba.  Please see some of my previous blog entries for complete reports on these trips.  The trips and seminars proved successful and rewarding for both me and my students.  I will be returning to these regions again with an expanded presence while introducing you to additional regions as well.  Instructional guiding on the lakes around north central Alberta will also continue in 2010 so if you are in the area and your plans allow contact me.

2011 is already booking fast and a number of months, such as June, are already full of seminars and trips.  I will be heading back to the Parklands region once again hosting both a weekend and week-long trip.  The week-long event is already full just through word of mouth!  I will be providing additional details regarding the weekend event shortly.  Limited to a maximum of 12 anglers, my Prowling the Parklands hosted trips include food, accommodation, seminars and one on one instructional time with me.  At this time the Parklands region offers arguably the finest stillwater fly fishing in North America.  You have the chance to trade blows with large fat rambunctious rainbows, browns and tiger trout in an unbelievably un-crowded setting.


As a result of the positive feedback we received in 2010 I will be joining Jeff Currier and Pete Erickson in March as we provide another weekend fly fishing seminar in Boise, Idaho.   Our seminar will provide detailed comprehensive instruction on a variety of subjects including warm  and salt water fly fishing, Euro nymphing, advanced stillwater techniques, hands on knot tying, casting instruction and much more.  Additional details are forth coming shortly.

I will once again be providing seminars at Fortress Lake Retreat, a weekend event in July and a week-long session in September.   The September session will have a specific focus on sight fishing for Fortress Lake’s trophy brook trout.  The sight of a huge brookie pouncing on your fly right before your eyes burns into your psyche forever, please join me if you can!

In May I will be travelling south to California once again for another stillwater school.  As with my fall 2010 session I will be working with Bill Forward from Forward Bound Guide Service.  I am looking forward to this event as chironomids, Callibaetis and damsels should all be beginning to stir.

I will also be working with Brian Chan and Mike Mitchell from B.C. Outdoors Sports Fishing magazine providing the popular Learning with the Pro’s stillwater seminars.  This year we will be at Ruddock’s Ranch in early June and Roche Lake Resort in September.  Our September event, as was the case in 2010, will have a definite advanced flavour to it.

Please visit my Calendar page on my site and stay tuned for specific blog and Facebook entries regarding each seminar.  I hope to have these completed shortly. 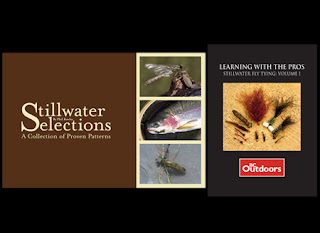 Response to my on-line store proved positive in 2010.  The addition of my latest book, Stillwater Selections and DVD filmed with Brian Chan, Learning with the Pros-Stillwater Fly Tying-Volume I was well received.  A number of you picked up autographed copies as Christmas gifts.  There will be another planned expansion in 2011 offering access to additional specific stillwater products so please stay tuned for these announcements as soon as they are firm.  I am hopeful for an announcement on the first level of expansion as soon as late January or early February.  A few additional details are awaiting to be finalized.

I wish everyone all the best for 2011 and hope you manage to squeeze an extra day or week on the water.  Explore a different region or chase a different species if you can.  The lessons learned often transfer back to what you are familiar with making you a better angler in the process.  Hopefully I will see you on my travels in 2011 and perhaps we can spend some time on the water together!
Posted by Phil Rowley at 7:12 PM No comments: