The show season is beginning to wind down and with the warm weather the anticipation of a new fishing season grows!  It has been a bit longer than I like since my last post, what a busy two weeks.

Since my last post Tessa is getting bigger and she seems to be house trained!  Fingers crossed as I type.  I was out in Ontario from April 8-13.  I began by providing a small tying session for 6 fly tyers at Grindstone Angling.  This is the second year I have done a session like this.  I featured a small cross section of patterns from my latest book, Stillwater Selections.

After the tying session I stayed up far too late and sipped scotch with friend Jon Babulic.  Jon was keen to point out the potential of the numerous lakes along the north shore of Lake Superior.  His pictures and tales definitely got me interested.  We hope to put a trip together in 2011.  The next morning we dragged ourselves out of bed a little later than we thought but based on the weather that greeted us I was OK.  It was about 2C, gusting to about 25K and light snow showers.  All in all a great day to be on the water! Which is what we did.

Jon has access to a private pond with rainbows to four pounds.  The Guelph area sits on a huge glacial aquifer that is perfect for producing small, intimate, productive ponds.  Many of the farms in the area have ponds holding double digit trout.   Jon and I braved the weather for about four hours.  We each took fish, I think I ended up with four all told.  By the end I resorted to hanging Balanced Leeches under an indicator.  Brown seemed to be the preferred color.  The water was cool so fish were lethargic at best plus I was cold to the core.  By fishing static I could tuck my rod under my arm and get my hands in my pockets to stay warm until the indicator moved or pulled under. 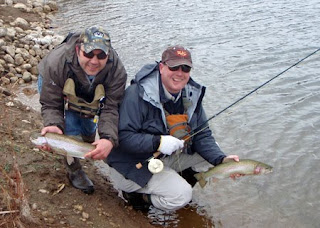 Over the weekend I provided a number of stillwater programs to the Issac Walton Fly Fishing Club (IWFFC) Forum.   This is my second year there and I enjoy, as always speaking to keen fly fishers.  Following the IWFFC Forum I hoped a flight to Ottawa to discuss the upcoming shooting season for The New Fly Fisher.  It looks like it is going to be a busy shooting schedule.  If I play my cards right I will be heading east again to sample the brook trout and Atlantic salmon fishing Labrador and Newfoundland has to offer.  As it stands now I will be in B.C. filming with good friend Brian Chan as we are doing an Urban Lakes episode in the scenic city of Nanaimo.

I returned home from Ottawa and spent the next three days catching up on a ton of emails and other tasks.   On the Friday night I headed south to Red Deer for a 1-day tying and informational session for a group of 10 anglers I am escorting to the Parklands region of southwest Manitoba in June.  Fishing should be prime and I am already looking forward to chasing large rainbows, browns and the hyper aggressive tiger trout on the fly.  Here is a picture of me in action!  It was a fun day, lots of sarcastic banter, my kind of tying environment!  Thanks to Bob and Karen Vanderwater for putting up with us. 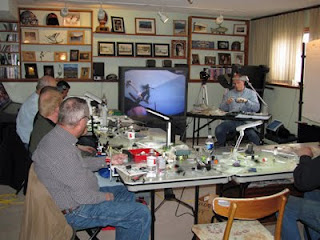 I am now preparing to head to Winnipeg for the weekend to speak at the Cottage Living Show.  This is my first time speaking at this show but I am looking forward to catching up with some friends as I have had the pleasure of visiting Manitoba in the past.  It is a shame my schedule wouldn't allow a few extra days to chase trout, bass or some Red River channel cats on the fly.  Channel cats are a great fly rod quarry and tax you and your gear to the max, all in all an excellent workout!

So I am off to Winnipeg.  I will provide a complete report and provide some updates as I am filming in Nanaimo next week.  Now that we have open water I am looking forward to getting on the water once again!
Posted by Phil Rowley at 4:17 PM 3 comments:

Happy Easter, the past week was a busy one.  So much so that I did not have the time to announce the latest arrival to our family.  Those of you following my blog on a regular basis know that roughly a week after Christmas we lost our beloved golden retriever Bailey to an apparent heart attack.  The loss was tough to take and the house was empty without her nearby.   It wasn't long before the family was on the hunt for a new companion.

Well I am happy to report that Tessa joined our family roughly 2 weeks ago.  Tessa is a purebred golden and has the typical relaxed easy to get along with personality the breed is famous for. I am looking forward to having her by my side when I head out on the water.  My wife Patsy and I are working to get her trained.  After 10 years with Bailey I kind of took for granted the house training component of raising a dog.  We are making progress and Tessa is starting to realize what going outside means in addition to running through leaves and mangling small sticks! 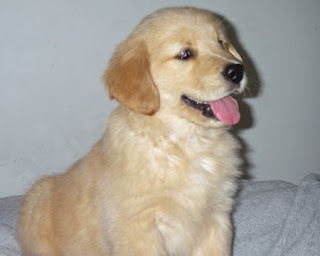 In other news I just finished a weekend seminar at Robinson's Sporting Goods in Victoria.  The event was a success and roughly 40 people attended.  On day one I provided a series of stillwater strategies and tactics seminars covering how to find trout in stillwaters, advanced chironomid techniques, sinking line techniques and 10 habits for stillwater sucess.  Sunday was devoted to fly tying as I presented my one day Fly Patterns for Stillwaters seminar.  Students were introdcued to my fly tying and design philosophies for lakes and were taken on a tying journey through all the major food sources.  Throughout the the two days I also provided a number of prizes depending on the answers to some skill testing questions.  I thoroughly enjoyed the interaction with everyone.  Thanks to all who took part in the seminar. 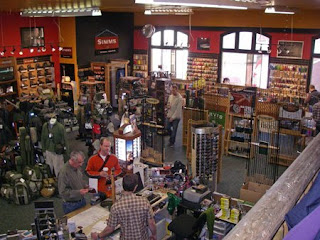 If you know of a store or a club who would enjoy a similar seminar please let me know.  I still have some fall dates available.  Just contact me directly at flycraft@shaw.ca and we can work on setting things up.

Finally, if any of you are interested in joining me at Fortress Lake I would suggest contacting Dave or Amelia at Fortress Lake Retreat as soon as possible as there are only a few spaces left.  This should be a spectacular trip blending world class stillwater fly fishing with trophy brook trout.  If Mother Nature cooperates we should have some fun using chironomid patterns to fool some of the brutes Fortress Lake is famous for.
Posted by Phil Rowley at 1:00 PM 1 comment: