First Fish of the Season!

Last week saw me in Calgary helping prepare for the 2010 Trout Unlimited Canada Conservation Dinner and Auction. This event is the largest of its kind in North America and generates a staggering amount towards coldwater conservation here in Canada. The auction was held on Thursday March 18th. I had a number of tasks to complete on the Friday but did manage to get a few hours on the Bow River on Friday afternoon. 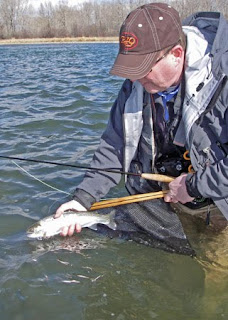 The weather was fantastic for March on the prairies, 8C, bright clear skies and no wind! Brian Meagher and I did a short walk and wade trip within the Calgary city limits and over two short hours landed a number of fish, both browns and rainbows and shook hands with a few others.  Right at the end of the day I lost a large brown that I too agressive with as I had to get going to meet some friends for dinner.  As it turns out I miss judged Calgary rush hour traffic and ended up 20 minutes late due to an accident.

I fished nymphs under an indicator as well as working a few runs Czech Nymph style.  My best fly was one I put together a few years ago when I was filming an episode of The New Fly Fisher on the Crowsnest River in Southern Alberta, the Stillwater Baetis. All of my fish came to this fly. 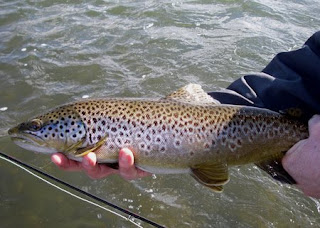 The Stilwater Baetis is a simple fly tied out of Stillwater Solutions (SWS) tying materials that good friend Brian Chan and I designed in partnership with Superfly International. My two favourite body colors are olive dun and light olive, for the light olive version use light olive SWS bleached pheasant tail and chartreuse wire ribbing. I am sure tying some out of the claret pheasant tail would work too. The tungsten bead is key, as the added weight tungsten provides gets the fly down quickly and keeps it.  Baetis nymphs are active swimmers and the Bow is home to probably millions of them. They are a constant component of the daily drift cycles on many rivers including the Bow. I would recommend you add a few of them to your fly box as well. 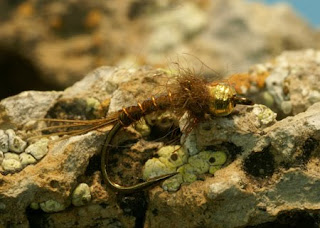