Continuing with my fall catch-up my next trip after Fortress Lake involved escorting a group of fly fishers back to my current stillwater paradise, the lakes of southwest Manitoba.  A region blessed with incredibly productive lakes, large browns, rainbow and tigers nestled within un-crowded rural landscape.  A land of six or 7 weight rods and minimum 2x tippet!  All in all, my kind of place!


I was fortunate to arrive the evening prior to everyone arriving to get things set up for the week.  Unload and sort out the food, check out to make sure the accommodations were in order and get my presentation materials organized for the seminars that are a feature of these hosted trips.  Bob and I were able to get things done efficiently so we were able to pre fish one of our featured lakes to see what we might expect.

As I readied my boat and gear it still felt like summer, warm and muggy.  The lake was still in bloom and the unseasonably water temperatures showed no sign of the fall fishing we were hoping to run into.  We tested out our usual favorites but fishing proved tough.  In the mid-afternoon backswimmers began to stir.  These larger cousins of the water boatman began to take flight while others returned to the lake crashing into the surface like tiny pebbles.  It took a while for the trout to clue in and respond. As soon as I saw the first aggressive swirl of a trout chasing a backswimmer I grabbed my Outbound Hover complete with a washing line set-up.  I had been hoping this might happen and had prepared my second rod in anticipation.


The washing line is an English presentation technique. It is an excellent method for imitating water boatman and backswimmers.  A buoyant fly is placed on the point.  Between the buoyant point fly a traditional, non-buoyant pattern hangs from a dropper.  The buoyant fly helps keep the other fly within the depth zone you are targeting or when working near the bottom away from weeds and debris.  I wanted to target the top 3-4 feet.  So in my case one of my favorite boatman or backswimmer patterns featured in my latest book, Steve Jenning’s Ultimate Boatman on point coupled with a smaller boatman pattern and my hover line proved perfect.  Or so I thought.

For those who don’t have my latest book, StillwaterSelections here is the Ultimate Boatman recipe: 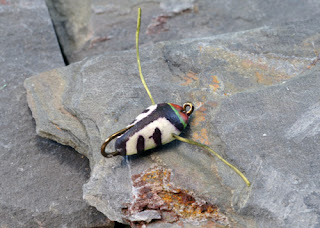 Tying Note:  Use permanent markers to provide the necessary markings on the foam body.  Coat your finished artwork with thinned C-Flex Cement or Soft-Tex.

Fish were swirling all around me.  A few chased the backswimmers across the surface pushing large wakes.  Their behavior reminded me of a dog snapping at your ankles.  Despite my best efforts to plop the fly in the ring of the rise I couldn’t hook up.  After a few minutes of frenzied fish activity it went quiet so I made a long cast, let the fly sink for roughly ten seconds and then began a slow erratic hand twist retrieve.  About halfway back to the boat the line simply went tight and then a whole lot of head shaking began.  After a number of runs a few cartwheels I had a beautiful fat pound rainbow resting in my hands.  It was shaping up to be another memorable week in the Parklands.


Our group arrived, had dinner and after I provided an introductory session settled in for the night.  The following morning was just ugly.  Strong winds from the northeast and driving rain.  We lasted until roughly 2pm before cooler heads prevailed.  Fishing was tough and of the people who accompanied me that day we only managed a couple of small rainbows.

The next day was a typical post cold front day.  Bright clear skies, a temperature drop of about 10C and strong winds once again.  With all the change and transition following the passage of a cold front fish had shut down.  It proved a good day for sightseeing around the lake, showing different techniques for slow conditions such as hanging flies static beneath indicators, slow retrieves, working deeper areas, and targeting areas foraging fish might be found.  Beaver lodges, weed beds, sunken islands and drop offs.  It was not a banner day for fish catching by any stretch.
And then there are tiger trout.  These fish are a ‘bucket list’ experience for many who attend my hosted trips.  A brown/brown trout hybrid these fish are unique, aggressive and in the Parklands reach appreciable sizes.  Twin Lake, located just north of Roblin is a catch and release fishery that is consistently reliable.  For me it is a lake that fishes better as the day progress.  This trip proved no exception.  We were welcomed once again by a familiar companion, wind.  Some of the strongest I have seen on this small and typically well protected lake.


As was the case earlier in the week the washing line technique proved a valuable technique.  Backswimmers began to move in the mid-afternoon.  Although the breeze was still an issue the aggressive swirls and splashes began to increase in numbers and frequency.

I couldn’t resist any longer! Tigers are a blast on top.  Often you can drag them up using a large #8 or #6 popper or dry fly such as a Chernobyl Ant stripped and twitched across the surface.  In keeping with my washing line theme I grabbed my 6-weight rod rigged with a Rio Grand and rigged up a ChernobylAnt on point coupled with the Ultimate Boatman on a 6-inch dropper.  Within a few seconds I had my first rise and promptly missed it.  Chalking it up to excitement I recast and began twitching and twisting the fly back.  A second fish rolled, again on the boatman, I waited longer than the perquisite, “God save the Queen” count just to be sure. I missed the fish again.  This happened seven times in a row!  I brought my fly in close to see how it was working.  Everything seemed fine.


I swapped the flies around going for more of a hopper dropper approach.  The tigers didn’t seem to like this arrangement nearly as much as I think the boatman dangled a bit too deep, back to my original arrangement. Casting out, again my theory proved fact as I soon had a rise but once again no hook up.  This was getting humorous! At least that’s the way I remember it! The Ultimate Boatman rides in the surface film just like the natural backswimmers it was called to imitate.  I felt that the dropper set-up might be injecting just enough slack so the fish spat the fly just as I was coming tight.


I stripped the flies in and re-rigged tying the Chernobyl directly off the bend of the boatman so it trailed some 2-3 feet behind.  Within seconds of placing the flies near a recent rise a rolled on the boatman. This time I did not miss.  For the rest of the afternoon I hooked fish consistently.  It proved an interesting lesson that I stowed away for future reference the next time I run into a similar situation.


While the trip was the gangbuster event it typically is Twin and its typically cooperative tigers iced the cake.  Getting them on top was an added bonus.  The week proved itself to be one of perseverance and patience.  Driving home the lesson that you have to play the hand you are dealt and make the best of the conditions before you.  Heck, it beats working doesn’t it?
Posted by Phil Rowley at 3:43 PM