This past week I rounded out my Newfoundland/Labrador trip at Tuckamore Lodge located near Main Brook on the eastern shore of the northern peninsula.  I was there filming another episode of The New Fly Fisher featuring Atlantic salmon.


Tuckamore Lodge is a luxurious four star destination that is popular not only with fly fishers but hunters during the fall months.  The food and accommodation was outstanding.  While we were there each evening saw a different group at dinner as tourists traveling Newfoundland used Tuckamore as a rest stop during their travels. 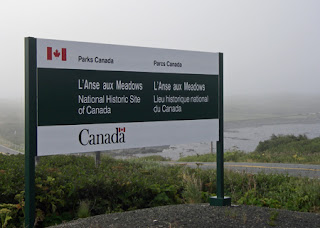 The region, like most of Newfoundland is home to a dense moose population.  These huge animals are a common site along the road side and caution should be exercised when traveling in the early morning or evening.  High speed night travel is not recommended as these animals cause serious damage and injury should you collide with one.


As for the fishing our schedule had us there at the tail end of the season.  Waters were beginning to drop and temperatures where beginning to rise, close to 70F in some stretches.  The salmon had been in the river for a while and where becoming more focused on their reproductive task at hand than chasing our flies.  When Atlantic’s are active the traditional methods involve either a dead drifted dry fly or riffle hitched wet fly.  Both of these presentation styles are predicated on taking advantage of a fresh salmon’s aggressive nature.  We did have some success with the dead drifted dry fly.  A White Wulff was particularly effective as was the reliable Bomber.  The trick with the dry fly was to repeatedly cover an area known to be holding salmon.  Short 6-8 foot drifts over a particular stretch worked better than trying for the world’s longest drag free drift.  My cameraman James was quick to adapt. It took me a while to accept this approach as I always aim for long drag free drifts when using dry flies. 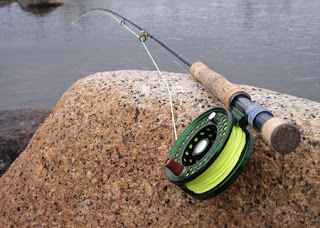 But as our week progressed our dry fly success dwindled.  We resorted to a traditional method, the wet fly swing.  Our challenge was getting the fly down to the fish.  In Newfoundland and Labrador you are only allowed to use un-weighted flies and floating lines.  Strike indicators are also a no no.

I switched to an Steelhead/Salmon Fluorocarbon leader to help get the fly down and a larger #6 sparsely dressed dark fly such as a Blue Charm.  This combination offered me the best chance to get my fly down in the water column to where the fish were holding.  We could see them from time to time flashing in the run and of course the odd rise or jump really helped!  Atlantic salmon also love to hold in front of large rocks.  A trait learned early in life as we observed parr holding in front of rocks beside us in the runs were fishing on the Salmon River.


I placed a cross current reach cast and added additional mends, typically upstream, to help sink the fly.  As the line and fly drifted downstream the takes typically occurred in the lower quarter when the fly was at its deepest just before starting its cross current swing as it came under tension.  Takes were very subtle.  I recall one where I only saw the tip of the fly line move suspiciously upstream.  I struck more out of instinct.  The water erupted. A large salmon went airborne immediately.  They aren’t known as the ‘leaper’ for nothing.  Two cartwheel jumps were followed by an energetic sprint down stream.  Within seconds it was over.  I swear the fish turned its head back toward me and spat the fly out complete with a look of disgust.  Oh well, better to have loved and lost than never to have loved at all!


I managed to persevere and land fish and we will have some great footage for an informative educational show The New Fly Fisher is known for.  In the future I will make a point of visiting Newfoundland Labrador in July when the runs are at their peak!
Posted by Phil Rowley at 12:11 PM