This past week I spent some time with Dave Jensen prowling one of his crystal clear unnamed spring creeks in central Alberta.  Dave and Amelia are owners of Fly Fish Alberta and Fortress Lake Retreat.  Check out my Blog List for more info.

Dave had invited me down on a number of occasions but our schedules never seemed to mesh.   This past week they finally did.  Our trip began with rolling rocks on the Red Deer River.  I needed to update my photo library of insects,  stoneflies in particular.  Thankfully I managed to get some passable shots of Skwala's and Yellow Sally's.  After an hour or so of photography Dave had me pack up my camera gear and get on the way to one of his special spring creeks.  Now don't bother asking me where I was because between our talking back and forth and the myriad of roads we traveled I couldn't find it again if you asked. 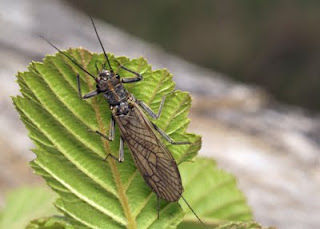 Upon arriving at the creek Dave spotted our first brown within minutes.  Dave's years of guiding and experience both hear in Alberta and in New Zealand was invaluable.  I was not in a position to cast.  Dave was and placed his cast just short of our target.  A first the brown showed no interest but a quick twitch turned the trout and it rose up just below Dave's Skwala pattern.  Fins flared it was definitely interested but would not commit.  Dave and I standing tall the trout seemingly staring straight at us should have spooked.  It did not, Dave twitched the fly once more and the brown took it without hesitation.  What a start, I was hooked. 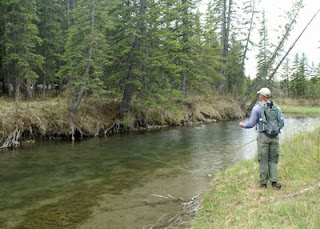 We carried on stalking each pool and run.  I learned the value of teamwork and accurate casting.  Mine still needs some work and Dave's tips were invaluable.  Especially when it came to my largest fish.  The overcast and windy conditions made for tough sighting.  Dave stalked up one bank of the run and spotted a large fish for me.  He could see it eating nymphs below so I knotted on a small beadhead Pheasant Tail below my small Elk Hair Caddis.  Dave guided my casting and just as the dry drifted into the trouts window he told me to, "Set, set, set!"  My dry didn't show any movement, at least on the angle I had but on the second set I responded to Dave's instruction and the water erupted.  After a good spirited battle the 20+ brown lay beside me in my net.  What an experience.  Thanks to Dave for providing the two images below. 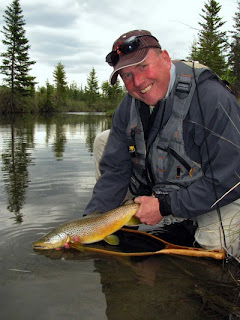 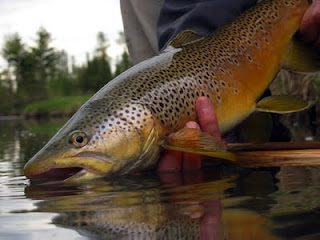 We each managed a total of two fish that afternoon.  As I mentioned sighting conditions were tough.  We saw at least 10-15 other fish which we could not coax.  Dave and I each had a couple of refusals and even some aggressive follows.  Nonetheless it was an incredible experience that I plan on reliving again, soon!
Posted by Phil Rowley at 1:48 PM